Welcome to the International Chapter of the Society of Wetlands Scientists. This chapter brings together wetland scientists and other professionals from different countries that demonstrate a global interest in wetlands. Our co-chairs represent SWS in Latin America and the Caribbean region (Tatiana Lobato de Magalhães) and the African region (Alanna Rebelo), as well as other countries not specifically incorporated into an SWS regional chapter.

SWS International Chapter promotes the development of wetland science and management through various opportunities, such as student grants, conference support, and internships.

Webinar registration is complimentary to all SWS members.  LAC webinars are in Spanish, but Portuguese and French webinars are coming soon!

The SWS International Chapter (Latin America and the Caribbean Region) is organizing a thematic group titled Aquatic Botany Group of the Society of Wetland Scientists. We invited interested people to the first meeting on Tuesday, June 14, 2022. Among the participants, 56 people from 12 countries (19 people are from Mexico, 10 from Colombia, 10 from Peru, 5 from Brazil, 4 from Argentina, 2 from the USA, and 1 person from other countries). The Chapter Co-Chair Tatiana Lobato de Magalhães will welcome the participants and discuss the objectives and opportunities for the group. Then we will establish the first group committee by voluntary nominations. 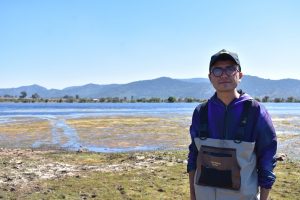 We're proud of their efforts in presenting the following talks:

Youth Engaged in Wetlands (YEW) meeting in Tokyo in January 2020

The International chapter co-chair, Tatiana Lobato de Magalhães, attended the Youth Engaged in Wetlands (YEW) meeting in Tokyo (January 16-21, 2020). The event was hosted by the Youth Ramsar Japan and was an important moment to work on the creation of an international network for wetland professionals and scientists.

The International Chapter is very proud to announce the top presenters at the Aquatic Plants Symposium hosted by the XXI Mexican Botanical Society meeting. The winners were Dr. Nelly Jiménez and MSc. Ricardo Wong, both of them get a 1-year of free membership at the SWS. The International chapter Co-Chair, Tatiana Lobato de Magalhães, was invited as a speaker at the Symposium. Additional, she had the opportunity to introduce to the SBM committee the potential SWS/SBM affiliation.

The International Chapter is proud to announce the top presenters at this year’s South African National Wetlands Indaba. The winners were: Nardus Bosman, Denisha Anand, Faith Mamphoka, Mthombeni Tinyiko Salome.  They were awarded 1-year free membership to SWS.  International Co-Chair Ian Bredin was the keynote speaker to talk about the SWS/SAWS affiliation.

We are proud to introduce our SWS LAC volunteer student from Peru. Karol will help us to build a wetland database in the Latin America & Caribbean region. She is doing 30 hours of volunteer work under the mentorship of Dr. Héctor Aponte and Dr. Tatiana Lobato de Magalhães.

Karol is a Peruvian Environmental Engineer from UNTELS University. She developed her undergraduate research focused on carbon capture in a coastal wetland of Lima. Karol is interested in the fields of climate change, coastal marine ecosystems, blue carbon, and environmental education linked with the latter subjects.

We are very proud of having a Latin American wetland nominated as new potential Wetlands of Distinction, representing the International chapter! Congratulations Cayambe Coca, Quito, Ecuador!

The South African National Wetlands Indaba was held in Kimberley, Northern Cape, from 8-11 October 2018. The Society of Wetland Scientists sponsored the awards for the best presentations at the conference. The outgoing President of the SWS, Arnold van der Valk, presented the awards at the Gala Dinner. We would like to congratulate the award winners:

View the presentation:
Without subtitles: https://attendee.gotowebinar.com/recording/5603423902788522753
With subtitles: http://sws.ontrapages.com/youtuberegistration

A Wetland Declaration was signed by over 550 participants at the conference. Read the Declaration.

November 11, 2016 -
South Africa’s annual National Wetlands Indaba (NWI) was held at the Swadini Resort in Mpumalanga Province over the period 25 to 28 October 2016, with 200 delegates attending the meeting from all over the country.  The word “indaba” is a Zulu word referring to important conferences held by traditional tribal leaders to discuss important matters.  The word today has widespread usage in South Africa to refer to a “gathering” or “meeting”.  Attendees at these meetings include wetland scientists, practitioners, decision-makers, NGO’s and other interested parties who gather to talk about wetland matters in the country. Continue reading here.

For the program and presentations, please visit http://nwi16.wetlands.web.za/programme.htm.

Click here to see more images from the 2017 Indaba.

The SWS International Chapter hosted a meeting at the Joint Aquatic Sciences Meeting in Grand Rapids in June 2022. Around 30 participants from both regions, LAC and Africa, joined to discuss the Chapter perspectives and opportunities. We take this opportunity to thank the co-chair Ian Bredin for his 3-years of service in this position, welcome Alanna Rebelo, the co-chair-elect for the Africa region, and to thank Tatiana Lobato de Magalhães, re-elected as co-chair for the Latin America and the Caribbean region. Stay tuned for upcoming news and meetings! 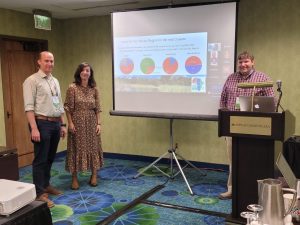 SWS President Max Finlayson and the co-chair of the SWS International Chapter, Tatiana Lobato de Magalhães, will attend the International Wetlands Symposium in Cuba, Ciénaga de Matanzas, November 2019. They have been invited to present talks and participate in other activities. Additionally, Tatiana will promote a contest, awarding outstanding presenters with 5 free 1-year SWS membership.

The co-chair of the SWS International Chapter, Tatiana Lobato de Magalhães, will attend the Symposium of Aquatic Plants in Mexico: Advances and perspectives at the Mexican Botany Society Meeting, Aguascalientes, Mexico, October 2019. Tatiana has been invited to present on a talk about aquatic plants and connectivity and she will use this opportunity to introduce SWS to Mexican Botany Society members and invite them to become SWS affiliated members. Tatiana will promote a contest, awarding an outstanding presenter with a free 1-year SWS membership.

The co-chair of the SWS International Chapter, Ian Bredin, will attend the South African National Wetland Indaba from the 7-11 October 2019 in Tzaneen, Limpopo Province, South Africa. Ian has been invited to present on the opportunity for South African Wetland Society members to become SWS affiliated members.

The International Chapter was founded in 1986 and harbored foreign countries that were not included in other chapters. In 1986 the chapter had 146 members. This chapter was initially part (informally) of the Canada Group but began to emerge as a separate entity in 1985, briefly as the Overseas Region and eventually as the International Region (Region 8) Group. It was first chaired by Armando de la Cruz and Francis Heliotis. Eric Gilman filed the official documents for this chapter in 2000 (Ewel 2020). Since the 10th INTECOL International Wetland Conference in Changshu, China, in 2016, there have been two co-chairs, one for Africa and the other for Latin America and the Caribbean. Currently, the chapter has 238 members, two co-chairs, and a 3-year term for leadership (International Chapter Bylaws and Standing Rules 2022).