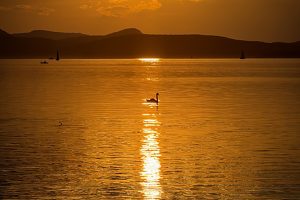 The SWS Europe chapter has some good news to share. We were alarmed by people from North Macedonia in 2015 because the very last wetland bordering the famous Lake Ohrid, Studenchishte Marsh, was threatened to be drained for tourist infrastructure development. After writing letters to the authorities on behalf of SWS, we organized our annual chapter meeting in Ohrid in 2018 and called for the protection of the wetland and the Lake by a Ramsar designation. We are very glad that this designation has now been submitted and that Studenchishte Marsh and Lake Ohrid are closer to protection and wise use. The local ‘Ohrid SOS group’ sent us the following message:

“After 27 years on the Shadow List, 3 National Biodiversity Strategies, 1 Society of Wetland Scientists’ (SWS) Europe Chapter Meeting and a sustained campaign by local Citizen Initiative Ohrid SOS, ancient Lake Ohrid in the Republic of North Macedonia is finally set to become a Wetland of International Importance under the Ramsar Convention, passing all 9 criteria for proclamation. Studenchishte Marsh, the last fully functioning wetland on the inland water’s coast and a focus of SWS engagement since 2015, has been included in the new Ramsar Site’s boundary, which may now offer some insulation against development pressures.

Europe’s oldest inland water containing over 200 world-unique flora and fauna species and a UNESCO World Heritage Site since 1979, Lake Ohrid has long been recognized for its extraordinary biological values, but it was only when an attempt was made to drain Studenchishte Marsh and replace it with a water-sports complex, apartments, and other facilities that a citizens movement to protect the location really galvanized.

SWS has bolstered that movement, first by letters to relevant national authorities and later through a Europe Chapter conference in Ohrid City at which the Declaration on the Protection of the Lake Ohrid Ecosystem was released. Its scientists volunteered technical advice and consultation for the drafting of the Ramsar Information Sheet (RIS), which was undertaken by Ohrid SOS members and submitted directly to the Ramsar Secretariat for provisional acceptance in 2019, bypassing institutional obstacles. After receiving tacit approval from the Secretariat, the RIS has finally been re-submitted through official channels and formally accepted. A new Ramsar Site is born!

The whole process has not been entirely without difficulty. Reluctance from both the Macedonian Ramsar Committee and Ministry of Environment had first to be overcome. Moreover, the boundary for the site has been reduced from that advised by SWS experts, diminishing the prospect of terrestrial wetland restoration, at least in the short-term. Plans to establish a 400-boat marina at Studenchishte Marsh have also not yet been abandoned and the latest draft General Urban Plan from the local municipality suggests that construction in the wetland could still occur. This will be a huge challenge for the Ramsar Convention’s efficacy, especially since the Convention is not yet fully integrated with national legislation and the UNESCO status has not so far delivered adequate protection.

Nonetheless, the present moment is one to celebrate as the habitats of endemic species such as the iconic Salmo letnica (Ohrid trout), Gocea ohridana (a critically endangered gastropod) are now Ramsar-validated as globally important, alongside biogeographically significant populations of Mergus merganser (goosander), Netta rufina (red crested pochard) and Microcarbo pygmeus (pygmy cormorant), with a whole host of other birds, fish, invertebrate species across multiple categories, and, of course, Studenchishte’s 5,000-year old peatlands.

Local activists from Ohrid SOS wish to express their gratitude to all SWS members who have contributed to the Ramsar nomination, especially Prof. Dr. Jos Verhoeven, whose long-term affection for Lake Ohrid and Studenchishte now has a fitting legacy.”