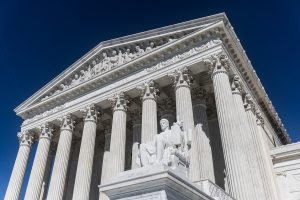 Written by the American Fisheries Society

On January 22, the U.S. Supreme Court ruled that challenges to the Waters of the U.S. (WOTUS) rule must be heard in district courts rather than in U.S. Federal Courts of Appeal presenting a procedural hurdle to the Trump Administration's efforts to repeal and replace the 2015 rule with a narrower rule.

Industry and local governments challenged the WOTUS rule in the Sixth Circuit Court of Appeals asserting that the rule unconstitutionally expanded the CWA's reach and misapplied Justice Anthony Kennedy's "significant nexus" opinion in the 2006 Rapanos case. The Sixth Circuit stayed the case while the Supreme Court decided the jurisdictional issues.

Now that the Supreme Court has ruled that the district courts are the proper body to determine the merits of the case, the Sixth Circuit will likely lift the stay and the WOTUS rule could go back into effect in most of the country unless a district court agrees to issue a nationwide injunction.

There are now three concurrent rulemakings related to the repeal and replacement of WOTUS. The first rule, filed in June, sought to repeal the 2015 rule. The Administration then sought comment on a proposed replacement rule in the fall of 2017. Facing the possibility of an unfavorable Supreme Court decision on the jurisdictional lawsuit, the EPA and the Army Corps of Engineers (USACE) then took steps in November to stop the 2015 WOTUS rule from going into effect for two years from the finalization of this third rule that would delay its "effective date." In late January, EPA and USACE sent a final rule to the White House Office of Information and Regulatory Affairs for review in hopes of wrapping up the "effective date" rule before the 6th Circuit stay is lifted.

The finalization of the "effective date" rule will likely result in a new wave of lawsuits challenging the Trump Administration's administrative actions since courts have ruled that the "effective date" of a rule cannot be changed after it takes effect. The 2015 rule had an effective date of August 28, 2015, but implementation is currently on hold due to the stay.

The rule to repeal WOTUS will likely be finalized after the "effective date" rule. These steps would give the Trump Administration until 2020 to replace the WOTUS rule with a new, narrower definition of "Waters of the U.S."

There continues to be a concern that a policy rider in a Senate Interior, Environment, and Related Agencies Appropriations bill that exempts the repeal of the Clean Water Rule from the Administrative Procedures Act might make its way to final passage of a Fiscal Year 2018 spending bill. Earlier this year, the CASS groups sent a letter to Senate Appropriators urging them "not to adopt a policy rider that would allow the federal government to exempt the administration's proposed repeal of the Clean Water Rule from the Administrative Procedures Act. The repeal of Clean Water protections requires a meaningful opportunity for stakeholders to engage in the process to ensure the best available science is considered. At a minimum, the public should have the opportunity to comment on this critically important issue." It is possible that policy rider could still make its way into law, and the ability of the public to comment on the process and the ability of the rule to be challenged in court under the APA would be severely limited.