SWS endorses and partners with March for Science 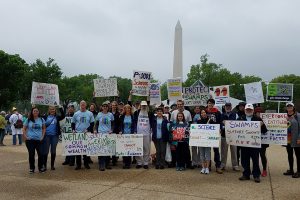 The Society of Wetland Scientists endorses and is a Partner of the March for Science as part of our mission to support sound science in wetland policy and stewardship. We hope to see you in Washington D.C. on April 22, 2017 #EarthDay, or any of the satellite marches at other locations. #sciencemarch

The March for Science is very committed to remaining non-partisan. No politicians will be speaking, and March organizers encourage messages on posters to focus on being pro-science and non-partisan.

SWS March for Science t-shirts:
SWS has created SWS March for Science T-shirts, which you can order directly from Café Press by following either of the links below. The shirts do not specify a March location, so they are appropriate wherever you are marching. Regular shipping takes about two weeks, so order soon!

SWS Washington, D.C. March logistics:
If you are marching with SWS, we request that your signs be non-partisan and positive, such as "Wetland Scientists Marching for Science."

SWS will gather from 8:00 am - 8:30 am on the plaza in front of the Smithsonian National Museum of American History, on Madison Drive. This meeting place is between two metro stops: you can get off at either the Smithsonian (Mall exit) or Federal Triangle metro stop. When you are on the Mall side of the National Museum of Natural History, there are steps that go up to the building. SWS will gather on the right side of the stairs (at the bottom). Look for people wearing the SWS March for Science T-shirts. Learn more about the official marching route on the March for Science website.

With the day filled with events, we recommend packing lunch, snacks, water, hats and sunscreen.