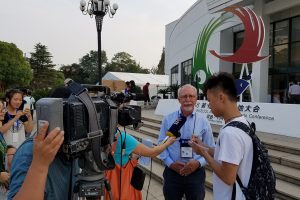 SWS was represented strongly at the 10th INTECOL (International Association of Ecology) International Wetlands Conference, held in Changshu, China, from September 19 – 24, 2016. SWS takes great pride in the many and substantial contributions of our members, who helped to make the conference in Changshu such a success. Click here to read more about the Society's involvement in the conference.

The conference brought together wetland scientists from around the globe, and offered all attendees the opportunity to observe the significant progress that China has made in protecting and restoring wetlands. The conference would not have been possible without the support and generosity of conference organizers, Nanjing University Ecological Research Institute of Changshu and the People's Government of Changshu, as well as the hosts: Nanjing University, China Compliance Office for International Wetland Convention, International Association for Ecology, Ecological Society of China and Wetlands International, along with numerous supporters, including SWS. Read the Thank You letter to SWS, from Shuqing An of Nanjing University.